The warmth, the soul, the voice, the smile, the presence that is Kalu James and his Thursday night residency at the Continental Club Gallery is fast becoming an Austin highlight. Tell the locals to get there early and plan to stay late. Tell tourists be prepared to heat the dancer floor in the intimate space. 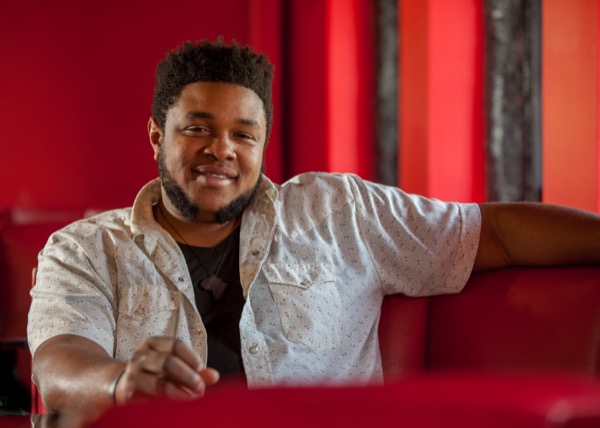 James describes his music as “feel music – a blend of blues-rock and soul, with hints of African folk rhythm.” He began playing the South Congress speakeasy in 2013. Since then, the good vibes have been plentiful.

“I love that room, and we’re very grateful to be amongst the caliber of acts playing there,” affirms James. “There’s never a bad night at the Continental Club or Gallery, and I still get nervous before every show. I mean, you just never know who’s in the crowd watching.”

Rumor has it that the Austin singer-songwriter might be an African prince. Turns out he’s the son of a African chief.

“I lived in the Republic du Benin and was raised in a boarding house in Nigeria,” he reveals. “In trying to provide for the family, dad was always gone, but mom was always around. We had lots of love in the household. As the firstborn, I saw all that hard work pay off for my dad, who got wealthy and became a chief.

“I went to boarding school in Nigeria when I was 9. For the first time in my life, I was away from the comfort of family and pushed to fend for myself – learn the invaluable lessons of tolerance, interacting, and connecting with all sorts of people. This experience shaped my life and made me who I currently am.”

James moved to the U.S. in 2001 and didn’t return home until a few months ago for his father’s funeral. Before landing in Austin, he lived in Rochester, New York.

“I lived the life of a typical immigrant, which is to work 40 hours a week, send money home, and take 12 credits to maintain a financial aid package. Somehow, I fit music in there through open mics and gigging. The stress led to a breakdown, and my doctor advised that I take some time off from everything.

“During that break, my best friend whom I moved to the United States with got accepted into graduate school at University of Texas.

“It took a DirecTV all-access of South by Southwest 2007 to make up my mind to move here. After five days of watching that, I drove my multicolored-held-together-with-parts-that-fit 1998 Ford Escort to Austin and have never left.”

James describes Nigeria as a continent different to the one he grew up on. Through technology and social media, he now sees more and more artists promoting the heritage of his people. He grew up listening to a musical melting pot, everything from Afro-beat, reggae, and funk to pop, hip-hop, and disco.

“Growing in up in Africa certainly created the tension and influenced the subject matter that I choose to explore in my songs,” he explains. “I was a very shy kid, but opinionated. In Africa, you never talked back to your parents or elders. Doing so warranted some serious punishment, which ranged from strokes of the cane to riding an imaginary bicycle.

“So I became more of an observer, and spent a lot of time writing poems and singing in the choir. I enjoyed the exploration of stories and flushing of emotions.”

His father wasn’t initially supportive of a career in music, but the two resolved their issues the last time they saw each other.

“There was some strain between us for a while,” says James, “but in 2013 he came to visit and saw me perform for the first time during the HEB Mueller opening. After the show he said to me, ‘I can see that this is what you want to do with your life, and I will support you whichever way I can.’

“The memories of his visit here is the best time I ever had with him because he finally accepted me.”

Kalu James remains a powerfully positive person. He admits he can be stubborn – “Don’t always take it on the chin. You gotta swing and duck sometimes!” – and likes to cite Bob Marley:

“The people who are trying to make this world worse are not taking the day off, so why should I?”